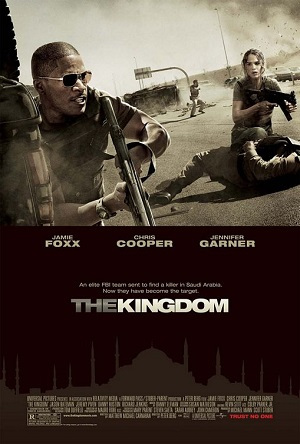 Written by Matthew Michael Carnahan and directed by Peter Berg, The Kingdom is a Post-9/11 Terrorism Movie released in 2007. It follows a team of FBI agents as they investigate a terrorist bombing in the Kingdom of Saudi Arabia. This is a War On Terror movie with a focus on criminal investigation rather than military action. Stars Jamie Foxx, Jennifer Garner, Chris Cooper, Jason Bateman and Ashraf Barhom. The movie opens with a succinct and generally accurate history of the interactions between Saudi Arabia and the United States. Following the credits, the movie opens with a terrorist attack (calling to mind both the Khobar Towers bombing and the Riyadh Compound Attack) on civilians in Saudi Arabia. Agent Ronald Fleury and a team of agents are sent to Saudi Arabia to "assist" the Saudis in the investigation of the attack. The film was criticized for its portrayal of Muslims (despite the highly sympathetic treatment of the Saudi investigators) and had a mediocre showing at the box office.

Not to be confused with the trope about a monarch's property, nor with the urban collaborative project The Kingdom.

Leavitt: Fleury. Tell me what you whispered to Janet in the briefing to get her to stop crying about Fran, you know, before all this, before we even got airborne. What'd you say to her?
Aunt: Tell me, what did your grandfather whisper in your ear before he died?
Leavitt: You remember?
Fleury: I told her we were gonna kill 'em all.
Grandson: "Don't fear them, my child. We are going to kill them all."