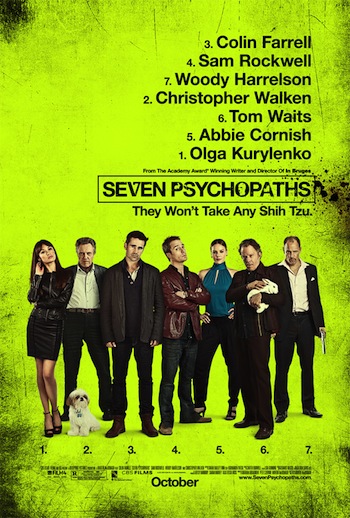 At least three of these people are not psychopaths. We think.
Zach: My name is Zachariah Rigby, I left a message on Billy's telephone in answer to the advertisement.
Billy: Well, I tell you, Zachariah. If you sounded like a nut, I probably just deleted you.
Zach: ...I don't think I sounded like a nut.
Billy: Were you screaming about eating my heart off a tray and then shitting on it?
Zach: No...no, I wouldn't do that.
Billy: Okay, you seem normal. Come on in. We gotta get this dog off the street because it's kidnapped from a maniac.
Zach: Dandy.
Advertisement:

Marty Faranan (Farrell) is a struggling screenwriter, currently attempting to get his next screenplay (titled Seven Psychopaths) past the title and stuck at the first hurdle of who and what the seven psychopaths are, especially so as he doesn't want it to be a stock Summer Blockbuster thriller about men with guns. Thus, Marty starts hanging out with his best friend and dog-kidnapper Billy Bickle (Rockwell), who does his best to help him out. Unfortunately for Marty, Billy isn't happy enough helping with writing, and attempts to get things moving by putting out a personal ad asking psychopaths to contact them.

Meanwhile, Billy's partner-in-crime Hans Kieslowski (Walken) soon learns the hard way that a Shih Tzu they recently took named Bonny belongs to Charlie Costello (Harrelson), an excessively-violent, short-tempered gangster with a rather creepy obsession with his dog. Naturally, things soon go to Hell very quickly and Marty soon finds himself trapped in a very difficult (albeit script-inspiring) situation and surrounded by several psychopaths.

It was released in the United States on October 12, 2012, Seven Psychopaths has several notable co-stars (even including Tom Waits himself), and received strong praise from both critics and the public, like its predecessor.