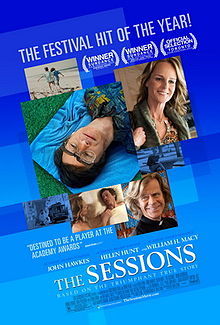 The Sessions is a 2012 drama film written and directed by Ben Lewin and starring John Hawkes and Helen Hunt. Based on the article "On Seeing a Sex Surrogate", Hawkes plays Mark O'Brien, a poet who has been largely incapacitated since a bout of polio when he was six. After a disastrous interaction with one of his helpers, he is commissioned to write an article about sex and the disabled, and thereby meets sex therapist Cheryl Cohen-Greene, played by Hunt. He consults with his parish priest, Father Brendan, portrayed by William H. Macy, and ultimately decides that he wants to lose his virginity before he dies.