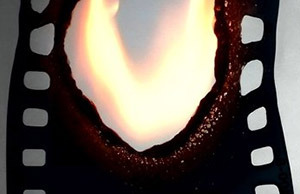 Sometimes, films can catch you off guard. And one way to do that is to make it look like the film has melted from the projector. This doesn't just happen in the films, this can happen on television, cartoons, heck, even webtoons! Just don't expect to be caught off guard if it's in a video or cartoon on the internet.

See Born in the Theatre for a broader trope dependent on the idea that one is watching film in a theater.