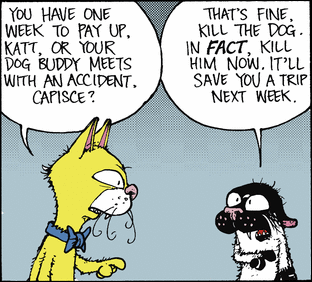 Darwin Mayflower: I'll kill your friends, your family, and the bitch you took to the prom!
Hudson Hawk: Betty Jo Biarski? I can get you an address on that if you want.
— Hudson Hawk
Advertisement:

A character threatens another with something that not only fails to scare them, but in fact they would consider a favor. For example, saying "I'll Kill You!" to the Death Seeker, or describing the tortures you could use to the person who is Too Kinky to Torture, or telling someone "I Have Your Wife" to be met with the response that You Can Keep Her!.

Compare Insult Backfire, Attack Backfire, Unishment, and Screw Your Ultimatum!. Often a Sub-Trope of Tempting Fate and the related Be Careful What You Say, Threat Backfire is also a common effect of telling someone they have to Go Through Me, responding to someone else's threat with You and What Army?, or using virtually any Stock Phrase featuring the words "over my dead body" or "from my cold, dead fingers". Also a common response to challenges on the lines of "Oh yeah? And what are you gonna do about it?" when the threatened person treats this as if it were a real request for information, to be answered with a practical demonstration of more or less devastating force, accompanied by the answer "This".

This one has a few variations:

Super-Trope to Blackmail Backfire, which is when the threat is a blackmailing attempt.

While Kirk may have thrown a few good punches, he was eventually thrown on the table and beaten to a pulp. In the sequel, he fondly remembers that fight, apparently assuming he did well. Pike reminds him exactly what happened.

O'Sullivan tries to blackmail Holt, only to fail.

O'Sullivan tries to blackmail Holt, only to fail.