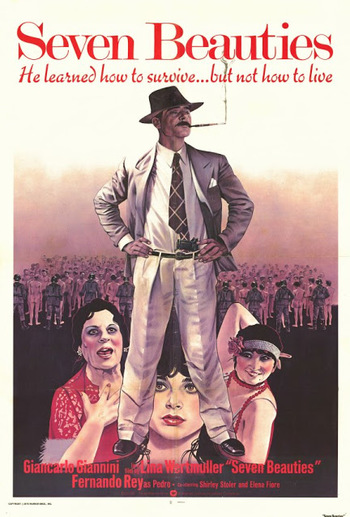 Seven Beauties is a 1975 film from Italy directed by Lina Wertmuller.

It's the story of Pasqualino, a petty hood from Naples (Giancarlo Giannini). The film opens in the latter phase of World War II, with Pasqualino as a soldier, having deserted from the Italian army on the Eastern Front against Russia and wound up somewhere in Germany. He and his comrade are captured, and wind up in a concentration camp. His terrifying ordeal in the concentration camp leads Pasqualino to attempt a seduction of the savage, sadistic, and horribly ugly female camp commandant (played by American Shirley Stoler).

Intercut with this narrative is a second story from earlier, before the war, when Pasqualino was a Mafia mook running a textile factory in Naples. When one of his sisters, who has been singing on the stage, is lured into prostitution, Pasqualino the dumbass macho lout decides that he has to confront her pimp. The pimp, who unlike Pasqualino the loudmouth is a genuine tough guy, knocks him down with one punch, leading Pasqualino to decide he has to kill the pimp. This starts a series of disasters in which the audience learns how Pasqualino's dimwitted machismo wound up leading him into the nightmare that is the first narrative.

Lina Wertmuller became the first woman ever to receive an Academy Award nomination for Best Director.