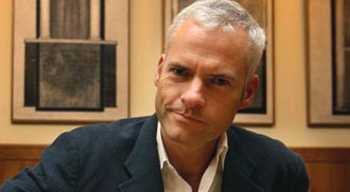 "Fucking" and "Cunt" are his middle names.
Advertisement:

Martin Faranan McDonagh (born 26 March 1970) is an award-winning, English-born Irish playwright, screenwriter and director. Jumping between both theatre and film frequently, several of his notable works include:

McDonagh's works are easily recognized by being (generally) violent black comedies that focus on dysfunctional families, hired killers, and/or a uniquely twisted form of Small Town Boredom. Expect incredibly colourful language, and (in theatre at least) settings in (or near) County Galway (and surrounding islands) during The Troubles.

Further, his brother, John Michael McDonagh, made his directorial debut with The Guard (which Martin produced) in 2011, and also released Calvary in 2014. Like Six Shooter and In Bruges, they both star Brendan Gleeson.