Hitman with a Heart 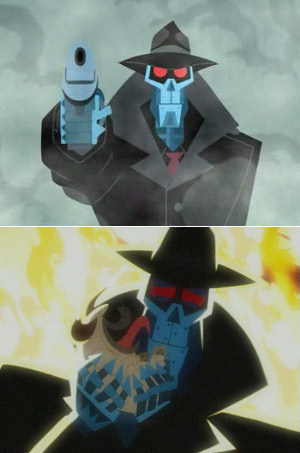 Lulu... sweet thing.
"Thane seems like the strong, sensitive, murdering type. You know those are always great to have around. A real cuddler."
— Joker, Mass Effect 2
Advertisement:

So, let us say that there is this guy who happens to be a hitman. The best in town. He will usually be an urban legend, moving swiftly beneath the concrete jungle, leaving no evidence behind, and fulfilling his jobs with the utmost care up to the point of perfection. Mossad? CIA? KGB? It does not matter, his targets drop like flies. No job is too hard and there is no one which he can not kill.

...Or is there? For perhaps even this cold-hearted killer will Never Hurt an Innocent (usually a child). And not only does he not do his job, but he may even turn against his employer to save the life of the very same person he was supposed to kill. This guy we're talking about? He is a hitman with a heart.

A common trope in a number of dark comedy and action movies is to have a sympathetic assassin as either the protagonist or a secondary character. Although their job is to commit murder for money, they also have a number of traits that make them sympathetic to the audience. This occasionally overlaps with Evil Is Cool, though the Hitman With A Heart is usually more of an Anti-Hero/Anti-Villain presented as a sympathetic human being, with some positive traits rather than being truly evil. He is also often racked by a number of "uncool traits", such as neuroticism, reclusiveness, some sort of substance addiction, or presented as an otherwise damaged individual.

Sometimes the hitman will have a code that makes him more easily acceptable by audiences, such as only killing criminals, or refusing to kill women and children, or not going after the family of his targets. He may take pains to make his hits painless, possibly even Cradling Their Kill. Or he may be saddled with a child or an innocent to protect. Commonly he will have to turn on his old employers (be they Government types or Mafia dons) after he refuses to perform a certain hit and has to deal with a Contract on the Hitman.

There is some Truth in Television to this. A mob hitman is a hired gun who only accepts hits on mobsters, period, and might fit the description.

A blend of The Atoner and Professional Killer, and can (sometimes) overlap with Friendly Sniper. Sometimes is A Lighter Shade of Grey. May result from falling In Love with the Mark. If this trope comes in the backstory variety, it's a Sympathetic Murder Backstory. If his reluctance to kill the target doesn't cue a Heel–Face Turn, it might just be a case of evil having a lot of standards. See also Badass and Child Duo, which this may result in.

A highly-skilled Drell assassin, nothing can stop Thane from killing his targets and anyone who gets in the way... but nothing will stop him from feeling remorse, either.

Alternative Title(s): Assassin With A Heart

A highly-skilled Drell assassin, nothing can stop Thane from killing his targets and anyone who gets in the way... but nothing will stop him from feeling remorse, either.