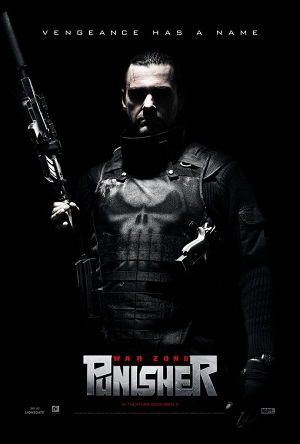 The third film adaptation of The Punisher, directed by Lexi Alexander and released in 2008.

Ruthless vigilante-hero Frank Castle (Ray Stevenson), waging his one-man war on the world of organized crime, sets his sights on overeager mob boss Billy Russoti (Dominic West). After Russoti is left horribly disfigured by Castle (who accidentally kills an undercover FBI agent during his attempted hit), he sets out to get revenge on Castle under the alias of Jigsaw. With the "Punisher Task Force" hot on his trail and the FBI unable to take Jigsaw in, Frank must stand up to the formidable army that Jigsaw has recruited before more of the mobster's evil deeds go unpunished.

A critical and financial failure upon initial release, the film nonetheless has a small cult following, chief among them Patton Oswalt who gave it a Colbert Bump in this

blog post. Having more in common with Garth Ennis's run on Punisher MAX than the last movie, the film could be described as a giant monument to violence, stupid fun, masculinity and balls-out insanity.

This is only one of two films (the other being Ghost Rider: Spirit of Vengeance) produced under the Marvel Knights banner, which was intended to be a cinematic equivalent of the Marvel Comics imprint of the same name. Though not an entry in the Marvel Cinematic Universe, this film is also a co-production between Marvel Studios and Lionsgate.