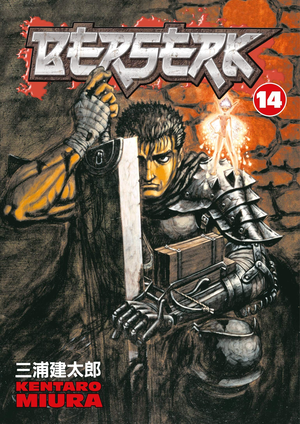 "Dragons are dragons because humans can't beat 'em. So, what's a man who beats dragons?"Pictured Guts, center; Puck, top right.
"In this world, is the destiny of mankind controlled by some transcendental entity or law? Is it like the hand of God hovering above? At least it is true that man has no control, even over his own will."
Advertisement:

The story begins In Medias Res with the first three volumes establishing Guts, the setting, and the antagonists. The Black Swordsman walks the land, a brooding, blood-stained figure. His name is Guts, and wherever he goes, evil spirits from hell follow. Guts bears the cursed Brand of Sacrifice on the back of his neck, which attracts ghosts and demons hungry to devour him — but he is also one of the strongest men in the world and carries a very big sword. When the demons find him, their deaths aren't pretty.

Guts is a warrior haunted by his past, namely the tragedy that ended in the loss of his arm, his eye, and everyone he cared about. He is Walking the Earth seeking only one thing: revenge against Griffith, once his best friend, who treacherously sacrificed him and all their comrades to the demon gods known as the God Hand in order to be reborn as their fifth member. The world is crawling with Apostles, monstrous servants of the God Hand who gave up their humanity in exchange for power. By hunting these creatures, Guts hopes to pick up the trail of Griffith and make him pay.

If any human can take on these legions of hell, it's Guts. Born from the womb of a hanged woman and raised by a cruel mercenary as a Child Soldier, he has spent his whole life taking one level in badass after another in order to be tough enough to survive. He wears fearsome armor, has a cannon-equipped iron prosthetic where his left arm used to be, and carries the slab-like Dragonslayer sword on his back wherever he goes. Initially accompanied only by the diminutive elf Puck, who tries to act as a voice of conscience for the ruthless wanderer, he follows the God Hand while leaving a trail of enemy corpses in his wake.

After the conclusion of the first arc, the story then goes into a twelve-volumes-long flashback, called the Golden Age arc, which explains How We Got Here and reveals Guts' painful backstory. We learn that Guts has survived an abuse-filled childhood by becoming a prodigious fighter and lives as a lone sellsword until he meets the charismatic mercenary leader Griffith and his undefeated Band of the Hawk. Griffith is a man with a dream of winning his own kingdom despite his common origins, and possesses an egg-shaped artifact called the Crimson Behelit, which he was told will grant its owner the world in exchange for his flesh and blood. Inducted into the Band by losing to Griffith in a duel, Guts finds himself for the first time surrounded by companions united by Griffith's dream and loyalty to each other, and grows to view Griffith with both friendship and admiration. By turning the tide of a hundred year war in favor of the Kingdom of Midland they become the most celebrated force in the land, but a falling out between Guts and Griffith plunges the latter into despair, setting off a chain of events that ultimately brings their friendship and the Band of the Hawk to a disastrous end.

Aside from Griffith, the Golden Age arc sets up the other major characters of the series: Casca, Griffith's serious and capable female second-in-command who evolves into Guts' Love Interest as their initially hostile relationship defrosts; Nosferatu Zodd, a demonic but honorable Blood Knight who cements the reality of demons to both Guts and Griffith; and the Skull Knight, an enigmatic rider in skeletal armor who opposes the Godhand and acts as Guts' Aloof Ally.

With the depressing conclusion of the Golden Age Arc, the series returns to the present day to show the deep-rooted effects of those events on Guts and the world at large. Guts is still pursuing revenge against the Apostles with Puck in tow, but he has attracted the attention of a Knight Templar named Farnese who is determined to arrest him on behalf of the Church. Meanwhile, the God Hand is stirring up trouble all across the world. Pestilence and foreign invasion threaten the people of Midland, who cry out for a savior. It may be that the newly empowered Griffith intends to step in to fill this gap and work his nefarious designs. The biggest development by far, however, concerns Guts. Finding that his solitary vendetta has gotten him nowhere, Guts discovers that he has one last chance to save from the ashes something—someone—that he thought he'd lost forever. But this will be the most arduous journey yet, and he will need new friends and allies if he hopes to succeed. And even if his body can survive being pushed to the limit when every fight seems more impossible than the last, the blackness left on his soul from two years of seeking revenge is not about to let go of him so easily!

In serialization since 1989, Berserk advertises itself as the "Number 1 Fantasy Comic" in Japan, and stands as the author's Magnum Opus. Miura incorporates story and visual elements from many different media into his epic manga, which was mainly inspired by Kaoru Kurimoto's ambitious and long-running Guin Saga fantasy series. He loved the classics of the shounen genre including Buronson's Fist of the North Star, as well as two of the darkest and most violent works of Go Nagai, Devilman and Violence Jack. At the same time, he appreciated manga written for the Shōjo Demographic and their focus on character drama, and has called Berserk the result of his attempt to fuse the worlds of Fist of the North Star and The Rose of Versailles. The latter is especially evident in his depiction of love and political intrigue in the court of Midland, and in the complicated triangular relationship between Guts, Griffith, and Casca. Miura was also a student of The Middle Ages and drew images from that period. Lastly, Miura acknowledges the influence of action, horror, Sci-Fi, and fantasy films from Hollywood and from some of his favorite literature in creating the look and feel of the series. His creation broke new ground because of the unique way that he combined and developed upon these influences, and Berserk has been successful enough to leave its mark on a new generation of storytellers.

Because of its frequently disturbing and graphic content, which includes child abuse, torture, sexual violence, and copious amounts of gore, this manga is NOT safe for all audiences. It's certainly not recommended for the faint of heart—or stomach! However, for those who dare to take it on, there's a huge payoff in the thrilling action and human drama as it explores the great problems of existence, such as revenge, fate, religion, morality, the causes of evil and suffering, the nature of an individual's hopes and dreams, and the various ways that people cope with living in a cruel world. The depth and atmosphere of the setting, the engrossing plot, the psychological complexity of the characters, and the virtuosity of Miura's art are all reasons that Berserk has attracted many loyal fans. Having said upfront that there's a lot of pain ahead, it would be just as wrong to misrepresent it as consisting of nothing but angst and gloom, since this series can sometimes offer inspiring examples of human resilience when you least expect it. It also contains a surprising amount of humor. The manga is published in Japan by Hakusensha and licensed in English by Dark Horse Comics. As of May 2021, it has 50 million volumes in circulation worldwide

For a while, following Kentaro Miura's passing from an acute aortic dissection on May 6, 2021, the series' future was uncertain. Episode 364 was posthumously completed by Miura's assistants based on his script, and released in Young Animal magazine on September 10, 2021, and was included together with the remaining uncollected chapters in Volume 41, published on December 24, 2021. On June 7, 2022 his staff announced they would be continuing the series to give it a proper ending

Be careful to not confuse this work with the similarly named classic arcade game Berzerk or with the 1967 B-horror movie Berserk! (1967).

Character tropes go to the character page and tropes from specific arcs go to the recap page.

WARNING: Do not read the spoilers if you have only watched the anime or the movie trilogy unless you are prepared to risk ruining your enjoyment of the manga; from here on out, spoilers will also include information about the latest releases. In addition, we cannot guarantee that all potential spoilers will be in spoiler tags. Read at your own risk.

They were much too big to be called Tropes. Massive, thick, heavy, and far too rough. Indeed, they were like a heap of raw folders: