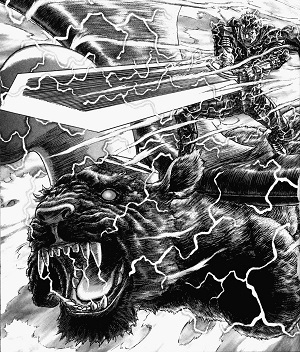 What are you gaping at with your eyes popping out of your head!? You'd think this was your first time seeing a guy stabbing a BFS through the forehead of a giant fog Emperor while riding a bat-winged Minotaur-lion through a lightning storm!
"Screw you. I'm purebred human, right down to the bone. Don't mistake me for one of you freaks."

open/close all folders
The Black Swordsman Arc
The Golden Age Arc
"[Guts] You're just like Griffith: your dream is everything; you think of nothing but yourself! You don't give a damn whether I'm around or not, do you?!"
— Casca, episode 21
Conviction Arc: Chapter of Lost Children