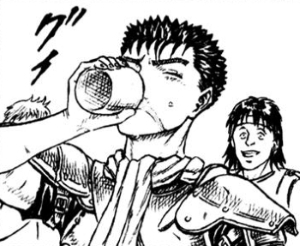 You're gonna need that, Guts.
Advertisement:

Now, with this helpful list of rules, you too can play the Berserk drinking game!

Take a shot every time...
Advertisement:

Take a shot every time...

Alternative Title(s): Berserk 1997, Berserk 2016, Berserk The Golden Age Arc, Berserk And The Band Of The Hawk