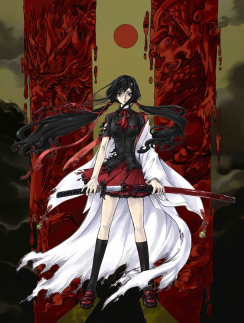 "What do you think people are made of? I'm not talking about blood or flesh. We do care about what's on the exterior, but we want to focus more on what people even now still call the "inside." You can also call it "nature." I guess you are either born this way or raised to act this way. Are people born like this or do they become like this? The answer is..."
— Opening Narration

Blood-C is a Summer 2011 Anime series that was produced and collaborated on by Studio Production I.G and CLAMP. It is the second anime based on Blood: The Last Vampire, following 2005's Blood+.

Kisaragi Saya is a High School girl born to a shrine family. By day, she's completely ordinary and enjoys hanging out with her friends. By night, she fights and kills the monsters called "Elder Bairns" who invade her town and attempt to feed on humans. But as Saya continues to fight for her life each night, she begins to notice something isn't quite right in this town...

The movie Blood-C: The Last Dark, which was out on June 2, 2012, is a sequel which continues the events of the TV series, one year later, and is set in Tokyo.

There is also a live-action film

released on August 27, 2017 which is entitled Asura Girl: Blood-C Another Story which features a completely new story set in the military regime of pre-World War II Japan, and follows a bloody conflict that erupts between villagers and Japan's Special Higher Police forces. It is written by Fujisaku and directed by Shutaro Oku who also directed the stage play. Another live-action film

entitled Blood-Club Dolls was released on October 2018 which would also be written by Fujisaku and directed by Oku.