Throw the Sheath Away 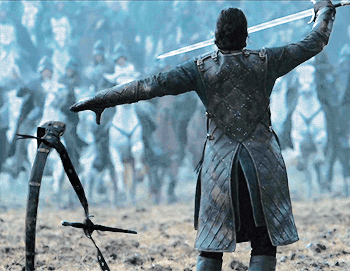 Before a decisive battle, the character tosses away his weapon's sheath (usually that of a sword) to demonstrate that he will not back down from the fight. A darker implication of this gesture is that the character realizes that his chances to survive are slim and he won't have a chance to sheathe his weapon ever again.

Aside from the symbolic meaning, putting away your sheath has a purely practical rationale: The sheath usually gets in the way during a fight, and the enemy can grab it to restrict your movement. Contrast Sheath Strike, however.

As mentioned, this works best with bladed weapons, since more modern ones, like firearms, lack an exact analog to a sheath. Throwing away a holster just doesn't look as dramatic.

Compare Symbolic Weapon Discarding. See also Burning the Ships, for when a leader forces this upon everyone on his side as well as himself.