Literature / Song of the Lioness 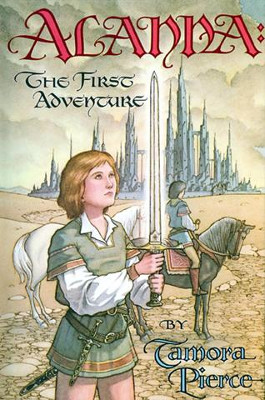 “You frighten them. You are too new; you are too different. Will they have to behave differently, now that you are of the tribe? Better that you die and become a legend. Legends force no one to change.”
Advertisement:

Song of the Lioness is the first series set in the Tortall Universe and stars Alanna of Trebond, a young girl who disguises herself as a boy to become a knight. The books follow her from the beginning of her training to adulthood as she struggles with issues both internal and external: chiefly her feelings about her gender and sexuality, and then the court intrigues surrounding the King's brother as well as becoming part of Tortall's army as it wars with its neighbors... to say nothing of her dealings with gods.

Originally meant as one book for the adult market, Pierce divided it into four and made a large amount of cuts to conform to the rules of length and content that Young Adult Literature had in The '80s. It is also a famous work of Feminist Fantasy due to the focus given to gender issues and its message that girls have nothing to be ashamed of, whether compared to men or other kinds of girls.

A list of characters is found here, but because many of the characters appear in subsequent series, there are many spoilers.