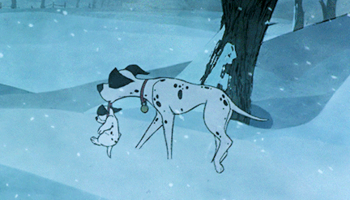 "My tail's froze...and my nose is froze and my ears are froze, and my toes are froze."
Rebel handler: Your tauntaun will freeze before you reach the first marker.
Han Solo: Then I'll see you in hell! Hee-yah!
— Star Wars: Episode V – The Empire Strikes Back
Advertisement:

When the big snowstorm hits, most people would prefer to stay inside with a cup of cocoa, waiting out the storm; they may even end up completely Snowed-In and thus unable to leave even if they wanted to. But sometimes, the plot has other plans.

Blizzards, of course, are inherently dramatic and dangerous; Snow Means Death, and freezing to death isn't a very fun way to go. Even without the fatal aspect, snow piles up fast and can make movement almost impossible, and furthermore, blizzards reduce visibility and, if there's hail, it'll hurt. Because of this, characters always seem to end up trapped in a snowstorm, or otherwise have to deal with one as an obstacle.

Perhaps they're forced to journey through it, either willingly or otherwise, often with the task of getting something like medicine- that is, if they aren't just lost and wandering. They may also just get trapped in the blizzard, forced to stay in one place while the elements rage around them. Video Games may make the storm so bad, the player can't progress without the right items or characters. In all cases, characters will struggle to survive against the cold and the wind, and in the worst cases will experience some form of hypothermia.