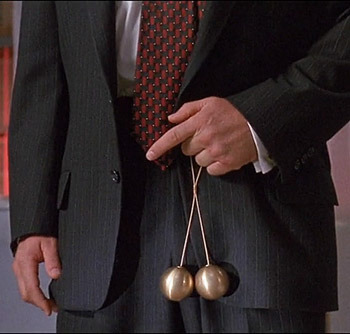 You know what it takes to sell real estate?
Advertisement:

When someone does something that's very brave, or at least very risky, it is said that they have Brass Balls, even if they are female. No reason has ever been given for why brass balls are either braver or more foolish than meatballs or billiard balls or... any kind of ball at all, really.note It's probably some sort of odd metaphor involving the term "brazen." The balls part we get, though. Evidently there is a direct correlation between them and boldness. Apparently it originated from pawnshops (with their distinctive brass balls hanging outside) where sellers would drive a hard bargain.

Elemental Crafting may come into play; superior to brass balls are balls of iron, beaten out only by balls of steel.

Not to be confused with Balls of Steel, where one has balls tough enough to withstand a Groin Attack.