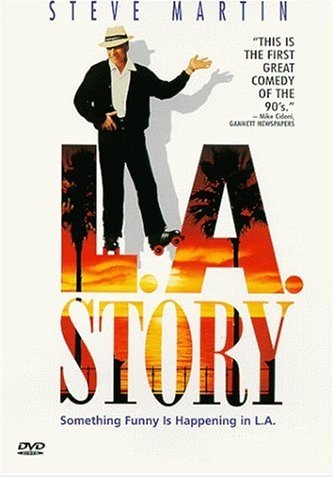 "Forget for this moment the smog and the cars and the restaurant and the skating and remember only this. A kiss may not be the truth, but it is what we wish were true."
—Harris
Advertisement:

L.A. Story is a romantic comedy starring (and written by) Steve Martin. Harris K. Telemacher (Martin) is a weatherman in L.A. whose love life is assisted by a mysterious, magical talking freeway sign. The city of Los Angeles is a star as well, one of the themes of the movie being the often bizarre attributes of the city itself, from the weather to earthquakes to the "fake" citizenry. Marilu Henner, Victoria Tennant and a pre-Sex and the City Sarah Jessica Parker play the love interests of Harris. The movie is peppered with humorous cameo appearances, from Patrick Stewart's scene-stealing maître d'hôtel to Rick Moranis' gravedigger. (And yes, that is Paula Abdul as the rollerskater.)