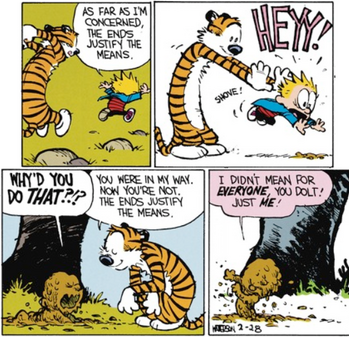 "When I hear anyone arguing for slavery, I feel a strong impulse to see it tried on him personally."
— Abraham Lincoln, Statement to an Indiana Regiment passing through Washington (17 March 1865)
Advertisement:

A situation in which a character is in favor of some action, revolution or social system because they assume that they will be on the good side of the change. They will invariably discover that they were wrong, with the double whammy of knowing they supported the measure that caused their suffering when they thought it would happen to somebody else.

Imagine that Bob attends a banquet for 200 people at the mayor's house. When he arrives, he is informed that they made an error when ordering the food: there is enough steak for the first 100 guests, but everyone else will have to make do with vegetables. Bob, looking around and seeing the room less than half full, says he thinks this is fair. Only afterward does he see the second dining room, filled up with people who arrived earlier, and realize that he isn't going to be in the group that gets a full dinner.

Poor Bob. He would have been wiser to remember the thought experiment from which this trope takes its name: John Rawls' "original position", which says that the only fair laws are those passed from behind the hypothetical "veil of ignorance" (i.e. you don't know whether you'll benefit or suffer from the change). Bob might have suggested giving out half portions of steak so that all the guests could have some meat. Unfortunately, he wasn't willing to give away half of 'his' share, and the result was a missed steak.

The main upshot of this trope is to show that blind self-interest is a bad thing — Bob shouldn't have been so quick to give "someone else" a steak-less dinner when he thought his meal would be fine. If he is fortunate, the plot will hand him a second chance to approach the question — presumably with a bit more compassion this time. But in many cases it's too late for regrets: Bob has his vegetables, and now he must eat them.

Of course, it is also possible that the mayor — who did know the outcome and could assign the menu options — steered Bob into making a choice that was worse for him, perhaps to damn him by his own words. Call it an "Original Position Gambit" if you will. This trope is also one of the places where Off the Table doesn't shift sympathy away from the person who refuses to re-extend the offer. ("Oh, Bob wants everyone to share the steak now? Too bad.")

A character whose thinking falls into the Original Position Fallacy may start out as a Hell Seeker, end up as a Boomerang Bigot, Dirty Coward, or any combination thereof. One category of person particularly vulnerable to this thinking is the Sub-Par Supremacist. If someone pulled the gambit version on Bob, it was probably a Magnificent Bastard skilled in Gambit Speed Chess. See also The Window or the Stairs, which weaponizes this trope by disguising the worse option as the better one.

This fallacy also drives a Prophecy Twist or two - someone hearing a prophecy thinks it'll come true on terms that'll be favourable to them, or that they'll never be in a situation where the prophecy might screw them over. May result in a Karmic Transformation or a Color Me Black situation; sometimes forms the 'twist' of a Karmic Twist Ending. Contrast Who Will Bell the Cat?, where a change that would benefit most at the cost of a few never gets implemented because no one wants to be "the few."

Closely related to Moral Myopia and Protagonist-Centered Morality. The Inverted Trope is of course The Golden Rule: Only do things unto others that you can agree would be fair if done unto to you.

The wife pull out her suitcase and starts packing as well.
"Uh... what are you doing?"
"Packing, I want to see how you manage to get by on $20 a month."

This quote serves as the inspiration for the Reddit subreddit r/LeopardsAteMyFace, which documents several posts about this occurring in real life, as well as the "Leopards Eating People's Faces" Party

"Vilkiss Awakens". Angelise questions why the Norma and she in particular have to be imprisoned in Arzenal and enslaved to defend the world against the invading DRAGONs. Jill retorts that it was "normal" humans, like Angelise herself thought she was until recently, who made that rule. We're then shown a flashback to the pilot episode where Angelise supports soldiers seizing a toddler from her mother's arms only a day before her parents' deception to hide their Norma princess was uncovered.

"Vilkiss Awakens". Angelise questions why the Norma and she in particular have to be imprisoned in Arzenal and enslaved to defend the world against the invading DRAGONs. Jill retorts that it was "normal" humans, like Angelise herself thought she was until recently, who made that rule. We're then shown a flashback to the pilot episode where Angelise supports soldiers seizing a toddler from her mother's arms only a day before her parents' deception to hide their Norma princess was uncovered.