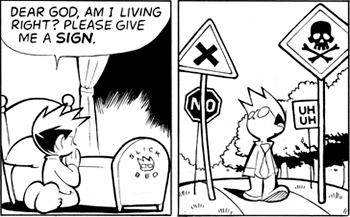 "A skull and crossbones? I'm supposed to become a pirate?"
"Send me a sign! A hint. ANYTHING!"
— Anya, Anastasia

Sometimes, when in a moment of great need, a character will cry out to God, Crystal Dragon Jesus, or What Have You for some kind of sign that shows them what to do, where to go, or even just to let the character know that they are not alone. Often, God is perfectly happy to oblige. The sign can be subtle, or it can be much more obvious. (When Played for Laughs, the sign is usually downright Anvilicious!)

A frequent subversion is where the character does get a sign, only to ignore it or assume it means exactly the opposite of the obvious meaning. This can be funny or tragic, depending on the plot.

Often paired with Heaven Above, where characters will ask for a sign by speaking into the sky. Subtler examples may fall under Maybe Magic, Maybe Mundane. Smite Me, O Mighty Smiter! is this trope with a more...belligerent tone.