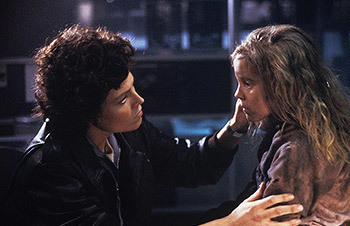 "I'm not sure which she needs more, a hug or a bath."
Advertisement:

The Troubled Child is an innocent-looking youngster who looks cute enough, until you notice they rarely smile, and tend to talk in a broken deadpan when they talk at all. They may inexplicably burst into tears at times. Usually the cause of their trouble is Parental Abandonment, Abusive Parents, or a congenital impairment of some sort.

This has excellent Woobie potential, but if the writers go too far, they may end up as The Scrappy for less "compassionate" viewers. Opposite of the Cheerful Child. Compare Creepy Child, and don't confuse with Bratty Half-Pint. Compare Lonely Rich Kid. See also Harmful to Minors, which frequently overlaps with this.

Oftentimes will grow up to be a Troubled Teen or Broken Bird.