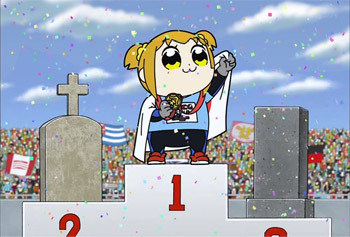 Torso takes silver.
With a battle cry go forth which is "Give the people what they want."
And what the people want could only be the senseless slaughter of the gutter-slime that litters this nation for cash and prizes.
Yes, this is the show where people bet their lives to win something big.
'cause when your life is shit, then you haven't got much to lose on SLAUGHTERAMA!
— GWAR, Slaughterama
Advertisement:

The Game Show Appearance from Hell. The characters are forced to compete in a dangerous contest where if they lose, they die in various ways. Tends to lend itself better to film than television, since a filmmaker can kill off characters with impunity.

It's common for these stories to take place 20 Minutes into the Future, and under a corrupt government, in order to Handwave the fact that they're basically murdering people for sport. Usually, the game is televised to legions of bloodthirsty people hungry for Bread and Circuses, thus raising the question: Who are the real murderers? The contestants fighting for survival, or the spectators cheering them on? note (It's the contestants. Duh.)

A post-modern take on the Deadly Game is to frame it as Reality TV, à la Survivor, and a subtrope of Immoral Reality Show.

A type of Public Execution. May contain a Duel to the Death or a Forced Prize Fight. Hunting the Most Dangerous Game is related, but generally lacks the "contest" element, and usually doesn't contain quite so much social commentary. A Blood Sport is a Deadly Game version of a modern spectator sport. Usually has a crew of Condemned Contestants. For an ancient counterpart, see Gladiator Games. For a deadly game that involves luck instead of skill, see Lottery of Doom. Subtrope of Involuntary Battle to the Death. Supertrope of Battle Royale Game.

The "Dream Jump" gives 1 person the chance to win big... and the remaining 9 to end it all for good.

Alternative Title(s): The Most Dangerous Gameshow

The "Dream Jump" gives 1 person the chance to win big... and the remaining 9 to end it all for good.