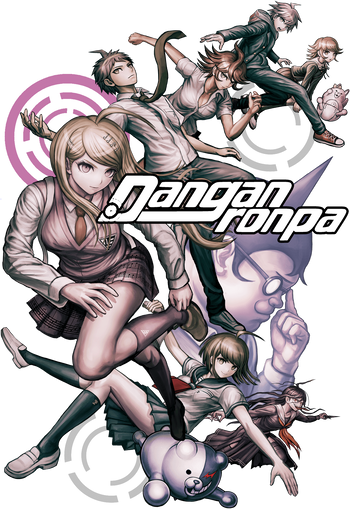 "It's punishment time!"
"No, that's wrong!"note Counterclockwise from top-right: Monomi, Chihiro Fujisaki, Makoto Naegi, Akane Owari, Hajime Hinata, Kaede Akamatsu, Komaru Naegi, Genocide Jack. Bottom: Monokuma. Background: Hifumi Yamada
Alright, folks! The final day of your precious carefree school life has arrived! Whether that makes you wanna jump for joy or weep till ya die, doesn't matter! This is it! So for the rest of the day, do your very tippy-toppy best!
— Monokuma, Danganronpa 1.2 Reload
Advertisement:

Danganronpanote officially one word, but is often spelled as two — literally translates to "bullet rebuttal" is a series of "high-speed mystery action adventure" visual novels created by Kazutaka Kodaka, and released by Spike (now Spike Chunsoft) for the PSP, PS Vita, PS4, Xbox One, Xbox Series X|S, Nintendo Switch, Steam, and iOS. The games combine mystery-solving with elements of shooting and even rhythm gameplay.

The premise of the first two main games in the series thus far take the same formula (while the third one is set in a new story arc, it generally sticks to this formula as well); the player takes the role of a new student at Hope's Peak Academy, a prestigious high school in Japan which only accepts the cream of the crop for its classes. This mentality extends towards any sort of niche, including unconventional ones like otaku, gamers and even criminals. Students with these extraordinary talents are given an "Ultimate X" titlenote "Super High School-Level X" in the original Japanese, and "Super Duper High School X" in the Project Zetsubou fan translation.

Unfortunately, things start to go awry once the new kid steps inside the school itself, as they lose consciousness and wake up elsewhere, with no memory of the interim. They soon find that all the exits and windows are locked to prevent escape, and meet several other students in the same predicament. Before long, the thing who put them there reveals himself—Monokuma, a sadistic, sapient teddy bear.

He quickly reveals that the students will be forced into a "school life of mutual killing". If a person murders a classmate, the rest of the student body will have a class trial to determine the killer's identity. If they get it right, the culprit is executed in a showy display tailor-made to their personality. If they get it wrong, however, the killer "graduates" and gets to leave the school, while the rest die in their place.

Of course, the students swear against something as extreme as killing each other. And yet, horrifyingly, the bodies begin to pile up. Throughout the game, Monokuma continues to give them all new motives to kill each other, and the player must find the killer in each chapter to make sure the survivors all have a shot of escaping together.

The series is rather complicated, consisting of a series of stringing plotlines over several mediums. It also has has a number of translations (official and unofficial) varying in consistency, so that context may affect how certain examples are written.

The series is currently in a sort of limbo as Kodaka has left Spike Chunsoft to open his own company, Too Kyo Games and no new plans about it have been revealed while ambiguous news about whether Kodaka would be helping in a new game or not spread.

On June 15th 2021, a collection of Danganronpa: Trigger Happy Havoc-V3, as well as Danganronpa S: Ultimate Summer Camp, called Danganronpa Decadence, was announced for release on the Nintendo Switch. This collection was released on November 4, 2021 in Japan, and outside of Japan on December 3, 2021.

Compare to Ace Attorney, Zero Escape and When They Cry for similar visual novels.

The Danganronpa franchise provides examples of:

Due to the sheer volume of spoilers resulting from the nature of the franchise's media, all spoilers will be unmarked ahead. You Have Been Warned!