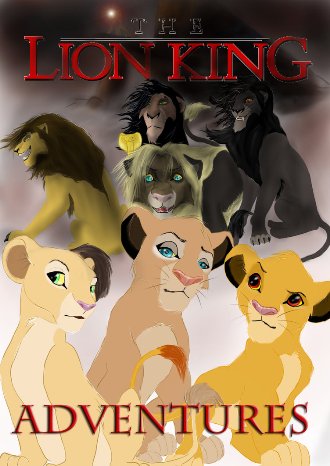 The series cover.note Front: Nala, Haiba, Simba, Second row: The Interceptor Third row: Hago, Scar, Death, Last row: The Writer.
"Welcome one and welcome all! I'm your eccentric fan fiction author, ThatPersonYouMightKnow! This is the official home of The Lion King Adventures. What's that, you may ask? Well, do you enjoy action-adventure stories in that Disney style we all know and love? If so, then this is the place for you! So start from the first story and work your way up. It's like watching a TV show. Get started, couch potatoes."
— ThatPersonYouMightKnow, author.
Advertisement:

The two were soon joined by a flirtatious cub named Haiba, who is the Prince of the Grand Lands. He's absolutely desperate for someone to date. In fact, so much that he has dated a stick and a river. Independently, of course.

The series had five seasons—or series, as the author prefers—and ran from September 2011 to April 2013.

After the series ended, a dark, drug-oriented parody called The Haiba Mystery was created by ThatPersonYouMightKnow and resulted in a follow-up series called Poison. He has also written many others works on the forum, including the sitcom Cheese and the Slash Fic Coming Out, most of which can be found on the fan forum

Archived links to each chapter can be found on the Recap page.