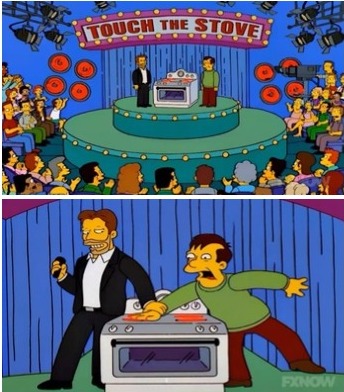 "Touch the stove!"
"Martine, 24, blonde, is an employee in a bankrupt multinational. She will be alone on a heavenly island in the middle of nowhere. Facing her, 8 rapists, divided in two teams, coming out straight from jail specially for the show. Will Martine manage to outwit team A and take refuge on team B's side? To survive, she will have a compass, one can of tuna, and one condom. Will she survive? Rape Island, coming soon, on M6."
— Les Guignols de l'info, "Rape Island trailer

A trope that became popular during the 2000s but dates back as far as the 1950s: A given story will feature or take place in an extreme reality TV show where candidates (sometimes convicted criminals) are forced to do degrading or violent things, even kill each other, just for the pleasure of fans all over the country and/or the world. If the show is "soft", they will just live constantly under the eye of the camera. The show will often include some Audience Participation, like choosing which candidate to "eliminate", and the host may Eject the Loser into a Death Trap. The viewers will enjoy the participants' sorrow, breakdowns, betrayals, and deaths, as if they were watching a movie. Such shows almost always have insane audience ratings, leading to the obvious implication that Humans Are Bastards and love to see others suffer. However, Stylistic Suck may intervene as the obvious immorality of the show can be used to contrast the normal morality of the universe in which the show is broadcast.

It may or may not be a Blood Sport, but expect to see a Corrupt Corporate Executive counting banknotes and grinning with delight while contemplating audience numbers. Deadly Game would be a Sub-Trope, though not all deadly games are reality shows. It can obviously overlap with Sadist Show and Sadistic Game Show.

It has been Truth in Television, but Bile Fascination has its limits. For that matter, see Point-and-Laugh Show. That said, No Real Life Examples, Please!