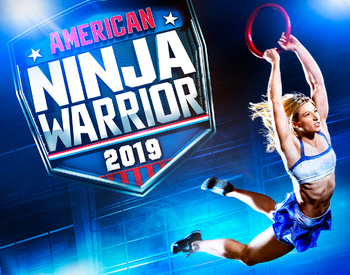 American Ninja Warrior is a reality show inspired by the bi-annual competition in Japan, Sasuke/Ninja Warrior. In fact, for the first three seasons, the prize for the show was being a member of the 10 American athletes who were flown to Japan to compete among the Ninja Warrior All-Stars. It currently airs on NBC, and it's the sole surviving show from G4TV which shuttered in 2012 (though the channel would be revived in 2021).

The show had its origins as a more straightforward competition prize offered by G4TV, who ran the English-subtitled Ninja Warrior. The opportunity to compete has grown to a large group of hopefuls who got the best time on an obstacle course.

It initially evolved into an elaborate competition after a preliminary elimination round. The contest set up three groups of five to go against each other in various obstacles, usually items inspired by Midoriyama and including a physical strain between obstacles. The team to have the lowest combined time has to send two of their members to compete against each other to determine who goes home. Unique to reality shows, and certainly in the spirit of Ninja Warrior, is that despite the spirit of competition, all of the people involved rooted for each other and looked to build the strongest team to show off in Japan.

In 2012, the format of ANW changed. There are no longer bootcamps, just tryouts. Tryouts were held in regional competitions, first in qualifiers (in which the top 30 advance to the next round.note According to the rules, anyone who completes the qualifier is guaranteed to make it to the next round. In the event where less than 30 people complete the qualifier (which almost always happened), the subsequent spots are filled up by the remaining competitors who made it the furthest on the course in the fastest amount of time. In season 9, additional spots may be granted so that five female contestants also qualify., then in City Finals. The top 15note Just like for the qualifier, anyone who completes the course is guaranteed to move on to the finals, When the number of finishers of the course is less than fifteen, the remaining slots are filled up by those who went the furthest on the course in the fastest amount of time. from each region was guaranteed a spot in Mt. Midoriyama in Las Vegas, with the remaining twenty-five slots filled by Wildcards. There is no time limit for the qualifier, the city final, or stage 3 of the finale, but stages 1, 2, and 4 of the finale are timed. The top prize is currently $1,000,000 (a sum that has doubled each season from the initial $250,000). The ANW Finals runs exactly the same way as the Sasuke version, with 100 finalists competing across four stages.

In January 2014, NBC aired a 2-hour special called "USA vs. Japan". Instead of a straight Ninja Warrior run, this takes elements from the earlier seasons of ANW. Both teams compete against each other in 1-on-1 races. All of the warriors get to run the stages, even if they wouldn't have been able to in normal competitions. However, the winner of each Stage was determined on a best 3-of-5 in 1 vs. 1 matches. The winner of the Stage got the equivalent number of points as the Stage number. So Stage 1 was worth 1 point, Stage 2 worth 2 and Stage 3 worth 3. Stage 4 served as the tiebreaker if both teams had 3 points at the end of Stage 3, and it is truly 1 vs 1. The winner of each match was determined in one of three ways:

In that special, Team USA completely wiped out Team Japan 6–0.

On September 15, 2014, NBC hosted the very first "USA vs. The World", which included Team Europe. The scoring is slightly different. Instead of best 3 of 5, a victory in each of the heats scored them points equal to the stage number. There were three heats per round. In that special, Team Japan again finished without any points, and Team Europe eked out a win over Team USA by 0.31 seconds in the tiebreaker.

As of September 14, 2015, the show has had its first ever winner crowned in Isaac Caldiero, the first competitor to complete stage 3 and the second to complete stage four, beating out his competition Geoff Britten's time by 3.86 seconds.

The second "USA vs. The World" special, with the same rules as the first, aired on January 31, 2016. In this special, Team Japan once again failed to score points, and Team USA beat Team Europe 10–8.

On January 29, 2016, NBC and formerly Esquire spun-off ANW with Team Ninja Warrior, featuring many of the fan favorites of ANW. In 2018, Team was renamed ANW: Ninja vs. Ninja, and the show moved to USA Network.

On May 2, 2018, Universal Kids announced the second ANW spin-off with American Ninja Warrior Junior, with 200 children who are superfans of the show tackling the course for the first time.

As of 2021, the American Ninja Warrior is hosted by former stand-up comedian and the winner of The New Celebrity Apprentice show Matt Iseman (since Season 2) along with former NFL player Akbar Gbaja-Biamila (since Season 5).

It can be expected that a lot of tropes applying to Ninja Warrior can be applied here.