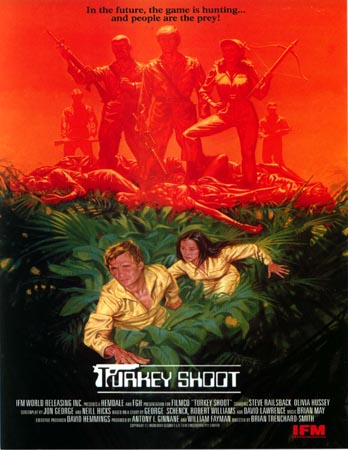 "I am a deviant! The lowest form of life on Earth! The Re-education and Behaviour Modification Centre is my salvation!"
Advertisement:

Also known as Escape 2000 (in the US) or Blood Camp Thatcher (in the UK), this Cult Classic 1982 Australian 'ozploitation' sci-fi action film was directed by Brian Trenchard-Smith, of BMX Bandits, Dead End Drive-in, The Man from Hong Kong and Leprechaun 4: In Space fame.

The plot of the film is fairly archetypal: it's 20 Minutes into the Future in an unnamed fascist totalitarian state. For the slightest perceived offenses, "deviants" are sent to prison camps to be subjected to reformative torture. The new arrivals at Re-Ed Camp 47 are Chris Walters (Olivia Hussey), a shopkeeper accused of helping a rebel; Rita Daniels (Lynda Stoner), a suspected sex worker; and Paul Anders (Steve Railsback), a political dissident who has escaped from several other camps. After suffering brutal treatment at the hands of Camp Master Charles Thatcher (Michael Craig) and his chief enforcer, Ritter (Roger Ward), the prisoners accept a deadly deal. They will be human prey in a 'turkey shoot' Thatcher has organised for Secretary Mallory (Noel Ferrier), and fellow VIPs Jennifer (Carmen Duncan) and Tito (Michael Petrovich). If they can evade the heavily-armed guests in the surrounding jungle until sundown, Chris, Rita and Paul will be set free, or so Thatcher claims...

The film is a charmingly cheesy, campy, over-the-top B-Movie, that can be a lot of fun if you acknowledge it for what it is and don't think too hard about it. Recommended for anyone interested in Australian cinema, or who enjoyed Mad Max. Quentin Tarantino has cited both the film and its director as among his favorites.

Another film by the same name was made in 2014, but was more like The Running Man and is only loosely inspired from the original. Internationally, it was titled Elimination Game.