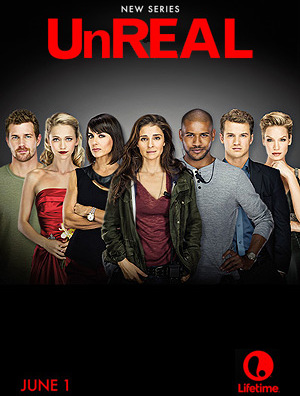 "Nobody does anything here to be nice. The sooner you learn that, the more likely you are to survive."
— Dr. Wagerstein
Advertisement:

Unreal (stylized as UnREAL) is a satirical drama series (often bordering on dark comedy) created by Marti Noxon and Sarah Gertrude Shapiro (based on the latter's short film "Sequin Raze"), and is rumored to be Very Loosely Based on a True Story—Shapiro's former employer was ABC's The Bachelor. It premiered on Lifetime in 2015 and follows Rachel Goldberg (Shiri Appleby), a producer on a dating reality show called ''Everlasting'' that is obviously ''inspired'' by The Bachelor.

Her skill at manipulating emotionally vulnerable contestants and extracting maximum drama is matched only by her self-loathing at having to do such a soul-killing job. In fact, the shame of having to work on a reality show pushed Rachel into a spectacular breakdown that resulted in her exit from a prior season of Everlasting, and everyone is surprised that she comes back to work in the first season. Her boss Quinn (Constance Zimmer) understands that everyone has a mortgage to pay and has no such self-image problems, committed to giving the people what they want and producing the best sleazy, trashy reality show possible.

There is behind-the-scenes relationship drama as well. Quinn is having an affair with Chet, the owner and executive producer of Everlasting. And Jeremy, Rachel's old boyfriend and Everlasting crewmember, has hooked up with a new girlfriend who is also working on the show. This background drama spawns and grows through the first season and well into the second.

Everlasting - sorry, UnREAL - then returned for another season in 2016, in spite of The Bachelor host Chris Harrison not being a fan

("...the main difference that I’ve seen is that people watch The Bachelor"). In what may be a Take That to The Bachelor, the second season's bachelor suitor is African-American (something which didn't happen on The Bachelor until 2020.). The second season's Everlasting features NFL quarterback Darius (B.J. Britt)desperately in need of back surgery, and technically unable to play with prospective "wifeys" being Tiffany, the entitled daughter of an NFL team owner; Yael, a.k.a. "Hot Rachel", who strikes up a relationship with both Jeremy and Rachel's new boyfriend-cum-midseason-showrunner Coleman, as well as being a reporter in disguise; Chantal, a half-black contestant with a dead fiancé; Ruby, the "blacktivist" who is intended to be set against fellow contestant Beth-Ann, a confederate-flag-bikini-wearing Alabama ranch sweetheart who ends up leaving the show pregnant with her ex's child. Madison has also become a producer following Shia's departure, Quinn tries to find love, and the past comes back to haunt everyone (but especially Rachel).

Now a Character Page that could use some love!