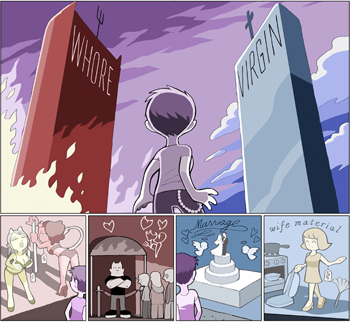 "People call me a feminist whenever I express sentiments that differentiate me from a doormat or a prostitute."
— Rebecca West
Advertisement:

A pattern of thought that divides female humanity into two mutually exclusive categories: Madonnas and Whores. The respectable and honorable Madonna figure, possessing and protecting social virtue (and deploring sexuality) is an object of worship and everything that all women should aspire to be. However, sex is not part of this; any woman who fails to live up to the Madonna standard is a disgusting and contemptible Whore driven exclusively by sexual desire and (therefore) lacking in morality and humanity. An active sex life makes one a Whore... unless one is married, and sometimes even then.

The Madonna-Whore complex is a notable contrast to The Three Faces of Eve, as it ignores the Wife archetype (one who is sexually active and morally good/"pure") and creates a False Dichotomy between the Child and Seductress. That said, many Madonnas are wives, though they are more often mothers or sisters, or other women with close emotional ties to whoever considers them a Madonna.

The Madonna-Whore Complex (AKA "Virgin–Whore Complex") was described by Sigmund Freud on the basis of some of his clinical work. Specifically, he noticed the difficulty some men had in having sexual relations with their wives because they differentiated women into these categories. Those men were aroused by prostitutes and mistresses but not their wives because, paradoxically, they respected the latter too much (they viewed them as fellow humans; i.e., not whores) to be sexually attracted to them.

Occasionally this is enforced by The Scourge of God.

A direct Sub-Trope of Sex Is Evil and closely related to Downfall by Sex.

Compare Slut-Shaming, Sour Prudes, Light Feminine and Dark Feminine, Betty and Veronica, My Girl Is Not a Slut, Sensible Heroes, Skimpy Villains, Good People Have Good Sex. Sometimes may be seen as a sign of Black-and-White Insanity. Closely related to Mama's Baby, Papa's Maybe, Heir Club for Men, and Altar Diplomacy, as demonizing female promiscuity is one way of ensuring political marriages only produce legitimate heirs. Contrast Ethical Slut, Good Bad Girl, Heroic Seductress, Hooker with a Heart of Gold, and My Girl Is a Slut. Not to be confused with Madonna Archetype.

Not to be confused with someone thinking Madonna acts like a whore... though that would probably be an example of this.

The Madonna: The Madonna is always an Embodiment of Virtue, always chaste, benevolent and often passive. She sometimes is corrupted—often sexually, and often by the Whore, directly or indirectly. Often the Protectorate or the Morality Chain of a Darker and Edgier male character, sometimes of a whole community, whose mission is to protect her purity and innocence. If she remains "untarnished" to the very end, she gets the Happy Ending she earned by chosing virtue and chastity over sex.

Common tropes applying to the Madonna:

The Whore: The Whore is always an Embodiment of Vice with massive sex appeal, catering to the Male Gaze and various fetishes. Usually spiteful, malevolent and scheming, and very often deeply jealous of the Madonna/Virgin. Usually ends up punished, ostracized and/or humiliated at best. Otherwise, she suffers the Cruel and Unusual Death she "deserves" for choosing sex over virtue and chastity. It is very rare for a Whore to get a chance at redemption, even rarer for her to be allowed to live after being redeemed.

Common tropes applying to the Whore: