Not Good with Rejection 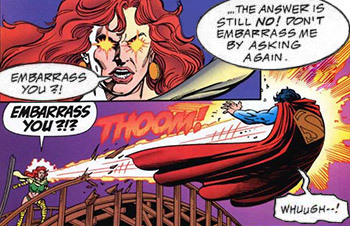 Hell hath no fury like a Queen of Almerac scorned.
"I'm not going to be ignored, Dan!"
— Alexandra "Alex" Forrest, Fatal Attraction
Advertisement:

May or may not be because of a character being arrogant and considering it a blow to their Pride to be turned down.

Sometimes a character may not have any feelings at all towards the person who rejected them but they may still get pissed off and torment the character as a result of the rejection, maybe even becoming The Rival. May or may not result in Attempted Rape, Blackmail, Self-Harm, or even worse. May occur in a Villainous Crush or We Can Rule Together scenario.

Mild cases of this are often a prerequisite to Ladykiller in Love scenario when The Casanova falls in love because the woman rejected all his advances, leaving him baffled and disoriented by the new experience.

Stalkers are usually unsympathetic whereas this can be sympathetic; the one who cannot handle rejection may just commit Seppuku or join the Legion of Lost Souls whereas a Stalker with a Crush will continue pursuing in ways harmful to the supposed beloved. Sometimes the person who doesn't like rejection will not take cheating well either.

Sometimes the rejected character will try to make the object of their affection take back the rejection or love them, by force. Sometimes the character may be so delusional that they misconstrue their loved one's actions as being rejection.

A character could have an attachment to the person who rejected them that is platonic, familial, antagonistic, sexual, or romantic in nature.

A subversion of this can be when the subject doesn't take well to being turned down initially* As in, their reaction was to chase the one who rejected them with a meat cleaver and almost kill them, but later eases up and becomes a Dogged Nice Girl.

Sometimes if the rejected character has their limits they'll eventually give up on their love for the person who rejected them.

If the rejected character is sympathetic this could result in Love Hurts and makes them a Hopeless Suitor. Could also result in revealing the Hidden Depths of a character. This trope could also enforce a character's Stepford Snarker or Stepford Smiler qualities.

Could be Played for Laughs with the rejected character sitting in a Corner of Woe, releasing Ocular Gushers, or Giving Up the Ghost. Can also be played for Melodrama with the character coming across as excluding Wangst.

The rejected character may also believe that they are Entitled to Have You.

There's a fundamental difference in character & story, depending on whether the rejected party:

NOTE: There are characters that take multiple routes.

Katherine reacts violently after Stefan rejects her and tells her he hates her.

Katherine reacts violently after Stefan rejects her and tells her he hates her.