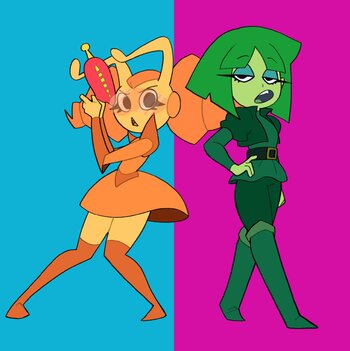 HANDS UP is an animated series by Joel Guerra

. The series follows the lives of Ula and Margo, two alien cops and Vitriolic Best Buds, and how they interact with each other on and off the job, often accompanied by groovy, rhythmic music that's usually relevant to whatever scenario is going on. One episode could be a typical slice of life, while the next could be a mini-musical.

While not quite as surreal as Guerra's other web series, ENA, it does have its own share of out-there moments, and the HANDS UP short "Elevator

" was as an immediate precursor to the style of random trippiness that would set the tone for the ENA series, which premiered a month afterwards. Coincidentally, both series feature Lizzie Freeman voicing some of the main characters (Ula, Sad ENA, and Moony).

All of the shorts can be viewed here

, though the playlist isn't in chronological order.

HANDS UP includes examples of: