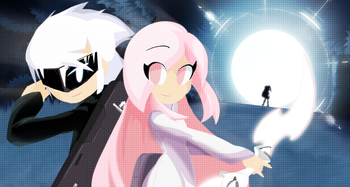 Gwain Saga is a animated series hosted on YouTube and created by artist and animator GeoExe. It chronicles the tale of Geo, a totally normal human dropped into the magical Kingdom of Gwain by unknown means. There he meets Ami, a local princess, and they become fast friends. More characters are introduced and it's slowly revealed that more is going on in Gwain's kingdom than there originally seems.

Notable for its colorful Animesque animation and video-game style, switching between Flash animation and pixel art. Gwain Saga takes a lot of inspiration (and even music) from JRPGs and Visual Novels, creating a unique aesthetic.

While Gwain Saga is the main series, there are many shorts and side-projects that are set in the kingdom of Gwain. Their canonicity is ambiguous, but they do provide extra insight into the characters.

You can view the original pilot here

, and the first episode here.