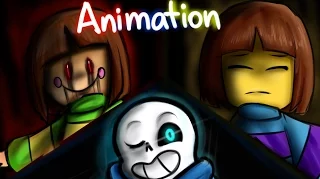 Megalomaniac: 1. A person who has an obsessive desire for power.
"Listen and hear a song the birds are singing. Sit down a while and watch the flowers blooming. A pleasant breeze flows by...leaving a trail of dust. This... is... your... fault...right?"
Advertisement:

. It started with a short animation based on the Genocide Run battle with Sans, and things quickly snowballed from there.