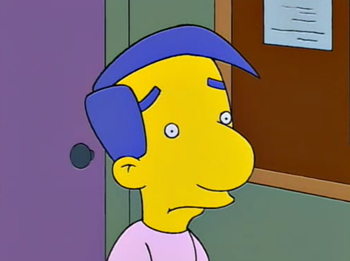 Bob is an Unlucky Everydude, the classic underdog. He's a terrible student and a klutz on the field. He can't be an underdog if he's attractive to other people, so Alice will occasionally comment that he's not much to look at. You don't see what's so ugly about him, but it's an Informed Deformity and maybe he's Hollywood Homely. Then at some point in the story he meets Charlie, the in-universe stud of the show whose beauty is admired by all (especially Alice). There's one problem, though. He really isn't any more attractive than Bob. That's odd...

Due to Generic Cuteness, Only Six Faces and possibly Beauty Equals Goodness and Good Eyes, Evil Eyes, it can be very difficult to differentiate an average or even ugly looking character from a beauty, with the only truly unattractive characters being Gonks. This can make it especially odd when the supposedly average-looking main character meets the in-verse Bishōnen of the show, and you realize the only real difference between them is the hair cut and maybe some Bishie Sparkles.

So how do you tell the audience the character is supposed to be average or unattractive while still making them easy on the eyes? Make their eyes beady. It's not that beady eyes are really all that ugly (just goofy looking), but in a world where beautiful doe eyes are the norm, it sort of makes sense that this character would be considered unattractive in comparison, even if they otherwise look like everyone else.

To summarize, these eyes are a visual cue that the character is a loser or outcast, and obviously they'd be considered unattractive by their peers. If this character is a main character or even given some time in the spotlight, their eyes will be less beady during serious moments or if they show personal growth.

Compare and contrast Face of a Thug, since they too have beady eyes, though those elicit a different reaction as beady eyes also tend to be associated with villains due to Good Eyes, Evil Eyes.