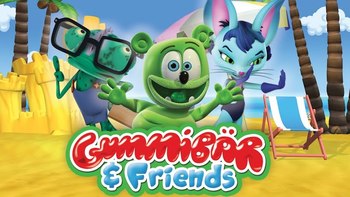 "Welcome to the Gummy Bear Show!"note From left to right: Harry, Gummy Bear, and Kala.
Advertisement:

Remember that extremely catchy Music Video that was uploaded to YouTube in 2007 of that green gummy bear singing about how much he is a, well, gummy bear?

Yeah, Toonz Animation made a series out of that. It's pretty weird.

Gummibär & Friends: The Gummy Bear Show is a Web Animation series that focuses on the typical adventures of the titular gummy bear and his two Canon Immigrant friends from Gummibär: The Yummy Gummy Search for Santa; Harry, an intelligent and cautious chameleon, and Kala, a fierce karate-fighting cat.

There are songs Once an Episode, and yes, they're still catchy.

It was first released to YouTube on June 24, 2016 with the episode "Spooktacular".

Not to be confused with that other gummy bear show.