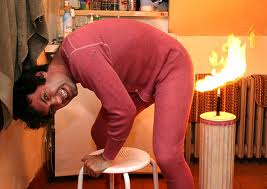 ...Strong desire, rages deep within...
"In China it's considered perfectly good manners to talk with your mouth full and to burp after your meal. Farting seems to vary according to the situation and your current company, so ask ahead of time. Lighting the fart is frowned upon in almost all provinces."
— Cracked, Seven Gestures That Can Get You Killed Overseas

This does work in Real Life, though not always, and not very impressively. Despite the fact that it is Truth in Television, Don't Try This at Home (for reasons that should be obvious).

Science fact: farts are, essentially, just the body expelling methane. Methane also flees quickly. Timing is required. Rather than the huge flame you see in certain cartoons, it'll be a tiny blink-and-you'll-miss-it flame. Don't ask us how we know. note Oh, and if you're unlucky, you may char your lower intestine. So, really, just don't. What are you, anyway? A vulgarite? Get a life and a hobby.

Compare Fartillery. Nothing whatever to do with Gaslighting. Can be a Revolting Rescue if it's used to save someone.