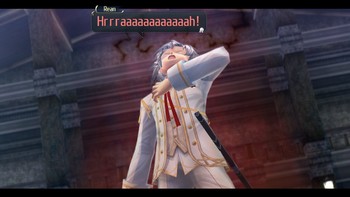 Activate your Super Mode, bring on the grunting!
"HYAA!!!"
— Link in just about every The Legend of Zelda game
Advertisement:

Voice acting is ubiquitous in video games today, but in the old days, when budgets were smaller, sound hardware was more basic, and disk/cartridge space was limited, developers relied on text where story was emphasized. Figuring that some of the drama was lost when a potentially emotional scene was pantomimed like a silent movie, the developers had to get creative. Generally, there are two solutions to this problem.

One form is the use of beeps at various pitches syncing to the text, generally speeding up or slowing down depending on how quickly the speaker is talking. More creative sound designers will use different sounds for individual characters to give a sense of variety and a voice to otherwise soundless dialogue. This method was common in the 16-bit era but has mainly fallen out of practice among modern games with at least a modest budget, though this style can still be found among indie and role playing games as a homage.

The other workaround for games with a higher budget is to employ brief, character-specific voice clips over the relevant text boxes. Examples: "Yeah!" over "Alright, guys! Let's do it!"; "Oh no!" over "I can't believe I was fooled for so long!"; "Aaaaaaaaah!" over any number of alarmed outbursts; and the ubiquitous grunts, battle cries, and double-takes when facing down a boss. This type of voice grunting is often featured in games that have a handful of key scenes that are fully voice acted.

A third, somewhat less common method can be combined with either of the above. Characters, particularly party members and important bosses, would have full sentences or shouts during battles, with a victory quote or two. This way, players can still get a grasp on a character's voice without having to go through the trouble of creating clips or sounds in regular dialogue, though again combinations of these three have been used.

Not to be confused with a particular stage teenage boys tend to go through.

Compare Speaking Simlish, when Voice Grunting is turned into a language.