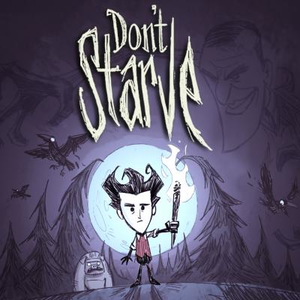 Where there's a Wilson, there's a way.
"Say, pal, you don't look so good. You'd better find something to eat before night comes."
— Maxwell
Advertisement:

Don't Starve is an indie Survival Sandbox game by Klei Entertainment. The player awakens in a procedurally generated world, populated by various monsters of varying levels of friendliness (these levels being "indifferent" and "murderous".) From there, it is up to you to survive and explore the world. To do this, one should gather resources, do science, and most importantly... Don't Starve.

Don't Starve started as an app for Google Chrome, but later became available on Steam. It saw a full release on April 23, 2013, with new content continually being added post-release.

On May 1, 2014, a DLC titled "Reign of Giants" was released. It added lots of new content to the game, including two new characters, three more boss monsters, the seasons of Spring and Fall, and a tweaking of the game mechanics.

Also in May 2014, Klei announced a multiplayer feature titled "Don't Starve Together". The closed beta was released the next Summer and Early Access was released on December 15, 2014. Don't Starve Together was officially released on April 21st, 2016. Initially it was just the original with multiplayer and all enemy health increased to compensate, but Don't Starve Together has subsequently received multiple updates, collectively referred to as "A New Reign," that have made it increasingly different from single-player. Later, another series of updates known as "Return of Them" started in 2019, which added seafaring, fishing and farming reworks and a collection of "Moon" based features. DST, with its popularity long since out-growing the original title, has continued to receive major updates in the form of characters, seasonal events, qol, and content changes.

July 30th, 2015 was the day that Don't Starve: Shipwrecked was revealed to the public, co-created by Capy Games. Shipwrecked was fully released on March 31st, 2016. Its theme was mostly about nautism and navigation, allowing the player to build and use boats to navigate on the waters.

On September 13th, 2017 the game saw further announcements for all editions of the game: an upcoming single-player expansion titled "Don't Starve: Hamlet" focused on the origins of the Pigmen; content updates for Shipwrecked; and a series of events for Don't Starve Together starting with "The Forge." More information on these announcements can be found here

On April 5, 2018 Don't Starve, and later its DLC, was announced to be coming to the Nintendo Switch the following week. On December 16, 2021 Don't Starve Together was revealed for the Switch, slated for a Spring 2022 release.

While most video games have a wiki, it had two

ones until they merged into this one

Mods on PC can be installed from each game's respective Steam