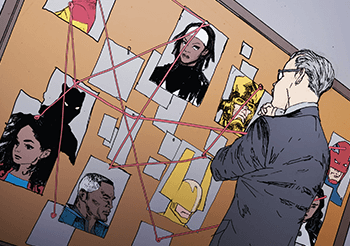 This company is being bled like a stuffed pig, Mac, and I got a paper trail to prove it.
Roger: Look, there's coded messages everywhere! In the New York Times, on the Internet, even in Catcher in the Rye.
Steve: Well, you did use an awful lot of string...
— American Dad!, "Bush Comes to Dinner"
Advertisement:

Somebody's conducting an investigation — and every little bit of information could be the break they need. Red Herrings are flying left and right, and they need to get everything organized. What better way to do it than with a pegboard (or an entire room) covered in pictures of people, maps of places, and cryptic hints? Often the items are related, and these relationships are expressed by a complex web of strings connecting pairs of items; thus the name.

An example of Law of Conservation of Detail, as almost invariably every single item will be plot relevant — although it's not always clear whether it was all planned out meticulously in advance, or whether the writer decided to use the various random items on the board as jumping off points for future episodes. Fans will naturally drive themselves crazy trying to figure out the relevance of every item. Don't stare at it too long, though.

The Reveal might uncover its existence, often with musical accompaniment while the camera pans along all the threads. This can show the audience that someone knows much more than it appeared, or how driven they are to expose The Syndicate, or how intimidating the Nebulous Evil Organization really is, or simply that they're nuts.

Used sometimes in a Relationship Chart. May contain a Serial Crime Map. Subtrope of Room Full of Crazy. Often the tool of a Conspiracy Theorist.

Not to be confused with the webcomic, a fanfic in a different fandom by the same name, or actual particle physics.