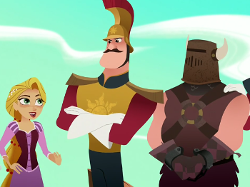 When Attila is accused of destroying Monty's Sweet Shoppe, Rapunzel puts her detective hat on to prove that he didn't do it.