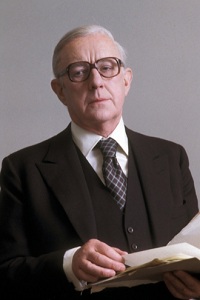 Alec Guinness as George Smiley
"I've got a story to tell you, it's all about spies. And if it's true, which I think it is, you boys are gonna need a whole new organisation..."
— Ricki Tarr, Tinker, Tailor, Soldier, Spy
Advertisement:

Tinker, Tailor, Soldier, Spy is a seven-part miniseries based on the first book in John le Carré's The Quest for Karla trilogy; it aired in 1979 and starred Alec Guinness as British Intelligence officer George Smiley. He reprised the role in Smiley's People, made in 1981 and based on the third book in the same trilogy.note The middle installment, The Honourable Schoolboy, takes place mostly in 1970s Hong Kong and Cambodia, so was quite naturally deemed too difficult to film due to budget constraints. Together, they chronicle Smiley's conflict with his opposite number in Moscow Centre, a legendary spymaster known as Karla (Patrick Stewart), and thematically deal with the minutiae of spy work and the emotional toll it wreaks on people's lives.