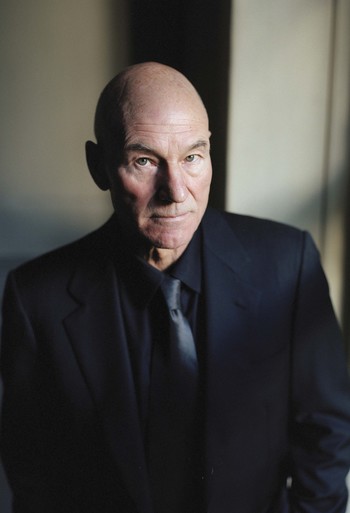 Yes, I'm bald. Who said I wasn't awesome though?note You just read that in my own voice, did you?
"I wasn't campaigning for a role in a Hollywood television series, it was a fluke. So you've got to have a measure of good luck, you really have, being in the right place at the right time."
Advertisement:

Stewart was born in Mirfield, West Yorkshire, studying drama at the Bristol Old Vic theatre school before moving on to the Royal Shakespeare Company. He had lost most of his hair by the age of 19, and impressed during his audition for the Old Vic by performing both with and without a wig and proclaiming himself to be "two actors for the price of one."

While at the RSC, Stewart had small parts in several movies (including Dune (1984) and Excalibur), before being cast as a relative unknown in Star Trek.

Stewart has always laughed off those who suggest that, as a classically-trained actor, he was "slumming it" in things like Star Trek—he suggested that in fact, all the kings and emperors that he had played with the RSC were merely preparation for the iconic role of captaining the new Starship Enterprise.

Similarly, Stewart has always tried to remain in touch with his theatrical roots—spending a season at the West Yorkshire Playhouse in his native Leeds, he had little time for critics who suggested that this was all the work he could find—he was doing it because he wanted to do it. His various theatre roles include playing Othello among an otherwise entirely black cast. Amusingly, at first he was one of the few TNG castmembers who took their job fully seriously and didn't mess around on-set, until he loosened up and, according to co-star LeVar Burton, would mess around and wreak havoc with the best of them.

Stewart is also Claudius (and King Hamlet) opposite David Tennant in Hamlet and he did the same in an 1980s BBC-TV production with Derek Jacobi as Hamlet. Stewart also became a regular on Seth MacFarlane's American Dad!, as the amoral, James Bond-esque CIA Director Avery Bullock.

He is a highly vocal figure in the fight against domestic violence, his father having been abusive towards his mother. More recently, having learned of his father's experiences in World War II and the long-term effects of PTSD, he's also begun campaigning for counseling and treatment of violent men, particularly combat veterans.

Was knighted in the 2010 New Year Honours List for services to drama. He still contributes to his local community, being the chancellor of the nearby University of Huddersfield and having been president of the local football (soccer) academy since his return to the UK in 2004.

His career and roles provide examples of the following tropes and associated trivia: