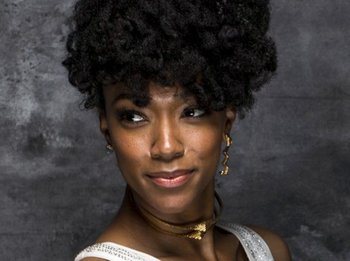 Martin-Green is best known for her various roles in television, notably AMC's The Walking Dead as Sasha Williams, which she portrayed for five seasons.

She currently stars on the latest iteration of the Star Trek franchise —Star Trek: Discovery— in the lead role of Michael Burnham. Martin-Green's casting makes her the second black and female lead of a Star Trek title, and her character is the second in the franchise's history to not start as a ship's captain.note The first being Benjamin Sisko, the character played by Avery Brooks on Star Trek: Deep Space Nine, a commander promoted to captain at the start of Season 4.

She is married to her Walking Dead co-star, Kenric Green.