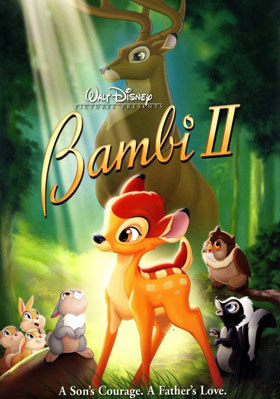 A DTV Disney sequel that is actually pretty good? What madness is this?!
Friend Owl: Who better to raise the young prince...than the Great Prince himself.

A 2006 Interquel to the fifth Disney Animated Canon film, Bambi. Produced by Disneytoon Studios, it was a Direct to Video release for parts of the U.S. and Asia, and theatrical elsewhere.

Taking place immediately after the death of Bambi's (Alexander Gould* famous for playing the eponymous character of Finding Nemo) mother and before the Time Skip in the first film, the Great Prince (Patrick Stewart) is left taking care of Bambi. With reluctance, the Great Prince decides to raise him until spring, though as he comes to bond with Bambi, and the young fawn maturing and desiring attention from his father, will the stern stag change his mind?

Released 64 years after the original film, Bambi II holds the world record for the longest Sequel Gap between two consecutive installments of a film franchise.