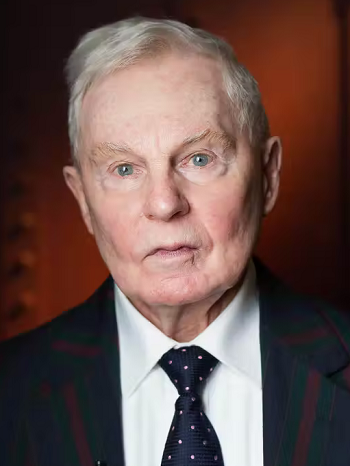 Sir Derek George Jacobi (born 22 October 1938 in Leytonstone, England) is an English actor, best known to for his extensive theatre work, the title roles in I, Claudius and Cadfael, Sen. Gracchus in Gladiator, Madsen in Dead Again, Stuart Bixby in Vicious and Professor Yana/The Master in Doctor Who.

He voiced the Master in the Doctor Who animated special Scream of the Shalka before guest-starring as the same character, though in a different incarnation, in the TV series proper in the episode "Utopia", a role he has since reprised in Big Finish Doctor Who since 2017. The fact that he only played the Master proper for a total of about three minutes was much mourned by the fans, as he was generally agreed to be excellent. He additionally played a version of the Doctor in the Big Finish Doctor Who audio episode "Deadline", making him (along with Mark Gatiss) one of two actors in this world to have played both characters, and the only actor to have done so in official Doctor Who media.

He appeared in an episode of Frasier as a thespian who, when Niles and Frasier were children, introduced them to the wonder of the theatre. When they met him again as adults and helped him get his own one-man show, he wasn't as good as they remembered. Many of the younger readers will know Derek Jacobi as Nicodemus from The Secret of NIMH, or from his guest appearance as Daedalus in The StoryTeller: Greek Myths. More recently, he appeared as the Archbishop of Canterbury in The King's Speech and Cardinal Orsini in The Borgias, promising some wonderful acting alongside Jeremy Irons... until he was poisoned in the very first episode. He has starred with Ian McKellen in a series called Vicious, a gay Dom Com about a long-partnered male couple.note Somewhat amusingly, Jacobi and McKellen were a year apart at Cambridge, and as it turned out, each had what they thought was an unrequited crush on the other. He was the narrator for the Christmas Episode parody "The Lie" and the Vignette Episode "The Night" on the Cartoon Network show The Amazing World of Gumball.note which is considered a British show, as it was created by Ben Bocquelet, who works for the UK division of Cartoon Network He also did voiceover work for most of the PBS adaptations of David Macaulay's architectural books beginning with Cathedral.

He also has a distinguished stage career, having got his big break in Laurence Olivier's National Theatre company, including lots of Shakespeare; he has played Hamlet over 400 times on stage, not to mention his performance in the BBC's Complete Television Shakespeare. (He was also in Kenneth Branagh's film version of Hamlet, as Hamlet's villainous uncle — another Claudius — in addition to his role as Chorus in Branagh's Henry V.) He played a very similar role as Chorus in Anonymous, appearing in modern times in a modern theater to introduce the film. While it may seem odd for so prominent a Shakespearean to appear in an anti-Shakespearean film, Jacobi is actually a prominent anti-Stratfordian.

He is married to fellow actor Richard Clifford, who is another to appear in many of Kenneth Branagh's Shakespeare films, though curiously the two never appeared together.

He was knighted for Services to Drama in 1994.