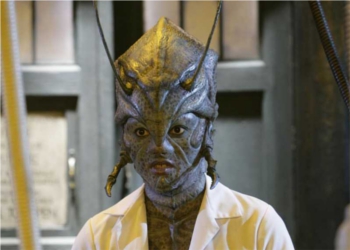 "Chan- don't call me a grasshopper -tho."
Professor Yana: Oh, every human knows of Utopia! Where have you been?
The Doctor: Bit of a hermit.
Professor Yana: A... a hermit? With, uh, friends?
The Doctor: Hermits United. We meet up every 10 years, swap stories about caves.
Advertisement:

The one where Jack is back. And so is a certain enemy not seen for a few incarnations.

Written by Russell T. Davies. The first episode of the Series 3 finale. Leads directly out of the Torchwood Series 1 finale, "End of Days".

The TARDIS lands in Cardiff to refuel, and the Doctor picks up a hitchhiker: Captain Jack Harkness, lately of Torchwood and barely recovered from his encounter with Abaddon. Jack, stuck on The Slow Path, has been waiting since the late 1800s for the Doctor to show up. And he's not going to let him get away twice. The hand-in-a-jar that Jack's been carrying around in Torchwood turns out to be the Doctor's old hand, which Jack's been using as a "Doctor detector".

With a dramatic cry of "DOOOOCTOOOOOOOOOOOOOOR!", Jack leaps onto the TARDIS as it's disappearing. It turns out that the TARDIS does not like Jack ever since he Came Back Wrong, and rejects him, hurling through time and space in an attempt to shake him off. Jack ends up dead when the TARDIS lands on a lonely dark planet trillions of years in the future. But everyone except Martha knows that death is pretty temporary for Captain Jack.

Once everyone's all caught up, the Doctor lays it out: they're at the ass-end of time, right at the heat death of the universe. The stars have all burned out. Humanity, they learn, have all congregated together in this planet's Elaborate Underground Base, where they've been lured by vague promises of shuttle service to Utopia.

The only one who knows anything about how to get to Utopia is kindly old Professor Yana, who is only played by Sir Derek Jacobi! Sir Derek's been stranded on this planet for a while, ever since he washed up on a beach here as a young kid. He's clever — a genius, in fact — and gets on tremendously well with the Doctor. As they hold hands and skip down corridors together and bond over Yana's gadgets, Yana's head starts getting a bit muddled every time he looks at the Doctor. Words like "Time Lord" and "TARDIS" trigger a very nasty kind of drumming in his mind. Yana tries to ignore it and explains to the heroes what he's building; his plan is to load everyone onto this enormous rocket and send them to Utopia, but the rocket isn't actually in working order. They need someone to enter a chamber filled with deadly radiation to reset some switches. Sounds like a job for someone immortal! Jack takes off a few layers of clothing for good measure before starting. While he works away at the device, he and the Doctor catch up on things (Daleks, Rose, etc.), and the Doctor confesses that he left Jack behind on Satellite 5 on purpose. Because Jack is now his own law of nature, an anomaly, something that just should not be. Jack calls the Doctor out pretty hard on his Fantastic Racism.

Meanwhile, the switches work! The evacuation starts; the rocket is boarded by the last dregs of humanity, hoping for something, anything better than a slow death in the night. Everyone congratulates each other on a job well done... and then Martha notices that Professor Yana has a pocket watch. And it looks just like the Doctor's watch. Which can be used as a receptacle for the Essence of a Time Lord.

Martha bolts from the room to tell the Doctor he might not be the last of his species after all — except the Doctor's less thrilled by the news than she expects. In fact, far from happy, he seems terrified at the prospect. Another surviving Time Lord? Yeah, brilliant, of course — only it depends which Time Lord...

In his laboratory, Professor Yana becomes increasingly fascinated by his watch. Strange noises echo in his head — a voice from long ago demanding power, a familiar cruel laugh, and a stronger voice ordering the "human fool" to open the light "and receive my majesty." His assistant Chantho all but begs him to just stop and rest for a minute... but he can't even hear her.

All at once, the Utopia rocket takes off, Yana opens the watch, and the Doctor and Martha recall the Face of Boe's dying words: "You are not alone." The Doctor goes into full-on Oh, Crap! mode and dashes back to the laboratory, but it's already too late: Professor Yana is dead, and the new man wearing his face proceeds to lock them out, let the Futurekind into the facility, and murder Chantho, who shoots him with her dying breath.

Which doesn't deter him, because, and it's this point the penny drops... he is The Master...

Ok. If you'd told people, back when the old show was cancelled in '89, that not only would Doctor Who return, but they'd get people like Sir Derek Jacobi to play the Master, well... They'd probably punch you out for taunting them or something. So, when and if you get a time machine, it's probably just as well if you don't do this. Not only that, Jacobi enjoyed the role so much he came back, in 2017, and started playing the Master regularly again for Big Finish, this time getting more than two minutes to be tremendously evil.

Anyway, bad ol' Koschei, not seen onscreen since the start of the Eighth Doctor's tenure, promptly regenerates into the bloke from Life on Mars, steals the TARDIS and leaves our heroes stranded in the umpteen-billionth century with savages beating down the doors.

End of the universe! Have fun! Bye bye!