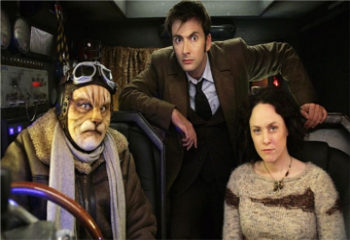 The one with the Traffic Jam. From HELL.
Cheen: It's only ten miles.
Martha: How long's it gonna take?
Cheen: [nonchalantly] Oh, six years?
Martha: What.
Advertisement:

The Doctor tells Martha that her one trip is over, and she can go home now... unless she wants to travel more. No reason, really, he'd just like to travel more. In fact, he'd like to take her to the future — and how about another planet? Martha is all for it, but throws him by asking if they can visit his home. Planet of the Time Lords, after all; got to be worth a look? The Doctor finds himself agreeing, fondly recalling the burnt orange sky, mountains covered in red grass, a gleaming city under its mighty glass dome...

... but nah, why would he want to go back there? Better idea: New New New, etc., York. Where drugs are cheap, legal and socially acceptable. Where people inexplicably look like cats. Where traffic never moves. Where the Doctor also took Rose once.

The Doctor even tries to make the same little jokes he made to Rose when he first took her there, but they just don't work as well when Rose isn't around to hear them. By now, Martha's figured out that she's the Doctor's "rebound", and she doesn't like it one bit. Also, the TARDIS has taken them to the undercity slums, where things aren't quite as happy as they are above the smog.

Martha gets kidnapped by a couple named Milo and Cheen so that they can have enough people in their car to get access to the elusive fast lane. The Doctor chases after her... into the Traffic Jam from Hell.

Before he dies of extreme toxic smoke inhalation, though, he gets picked up by Thomas Kinkaide Brannigan and his wife Valerie. Estimated time of arrival? Oh, another six years or so.

The Doctor, not wanting to wait that long, jumps from car to car, and tries climbing down to Martha's spot, but he can only get so far.

Meanwhile, giant evil crabs that feed off pollution have snatched Martha's car out of the air and are hell-bent on eating her. The Doctor quickly recognizes them as the Macra and notes that they've devolved into mindless beasts over time, living in the depths of the motorway. Even if he could get there, there's hardly any way to get back.

The Doctor will not be deterred, but before he can continue he's caught by Novice Hame, one of the cat-nurse-nuns he met during his last trip here. She transports him against his will to the upper city, where the only other remaining "person" is the Face of Boe, the oldest being in the galaxy, who's the only thing powering the motorway and keeping the rest of demi-humanity alive. It turns out that the planet's inhabitants all got wiped out by an unstoppable plague that killed everyone (including itself). And all the motorways are closed, and have been closed for years. All those cars with all their eternal fuel and food supplies are driving in eternal circles around the deadly city smog.

The quarantine placed on the planet was set to last 100 years, so it has to be released manually. The Face gives his life to open up the motorway exits and save Martha. The Doctor opens the gates and all the cars ascend into the bright upper city, with the people inside praising Jehova for saving them from the Macra.

As the Face dies, he imparts his final message, as foreshadowed in "New Earth". The message? "You are not alone."

Martha refuses to leave until the Doctor tells her just what he is and what's going on. The Doctor sits down with her and tells his story from the beginning, starting with "there was a war"...