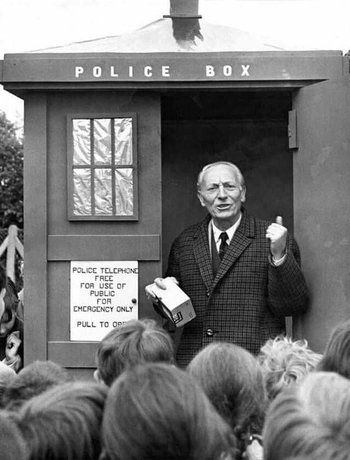 "The moment this brilliant young producer Miss Verity Lambert started telling me about Doctor Who, I was hooked. I remember telling her, This is going to run for five years. And look what's happened!"
Advertisement:

William Henry Hartnell was a British actor born on 8 January 1908, remembered primarily as the First Doctor from Doctor Who — although when he took the role, nobody knew there would be a Second Doctor, let alone a Twelfth, or even a female Doctor.

Prior to becoming a national icon, he had primarily played military types (such as the eponymous Sergeant in Carry On, Sergeant) and sinister hoods — he turned in a memorably creepy performance in Brighton Rock, where he was overshadowed by Richard Attenborough's turn as Villain Protagonist Pinky. Hartnell also appeared with Peter Sellers in 1959 film The Mouse That Roared, again as a sergeant. It was supposedly his frustration with constantly having been offered nothing but "tough guy" roles that drove him to accept his fateful role as the Doctor.

The First Doctor's crotchety old man persona was partly influenced by Hartnell's own nature, particularly because his memory was beginning to fail him; his blustering diatribes at his companions often went off-script, which, in an era when Television was essentially live theatre performed for a camera, resulted in more than a few occasions where the other actors are visibly struggling not to corpse and improvising like crazy to get the scene back on track.

His sadly increasing infirmity led to the creative team finding a new way to continue the show; since the Doctor was an alien, who was to say what he might or might not be able to do? He might even turn into a completely different person... and thus was born Regeneration, by means of which a television series that started in 1963 is still airing today. He reprised the role of the Doctor once more, in the serial "The Three Doctors", filmed in 1972; with his health in serious decline, he had to appear only in pre-recorded inserts, and read all his dialogue from cue cards, but still managed to deliver a spiky putdown of Patrick Troughton (who he had personally suggested as a worthy successor) and Jon Pertwee; "So, you're my replacements, hmm? A dandy and a clown!"

On 23 April 1975, after a long illness, he died in his sleep; his death was reported on the BBC National news, illustrated — naturally enough — with a clip from his time as the Doctor.

that covers much of his early career.

Was played by David Bradley in the 2013 Based on a True Story BBC Drama An Adventure in Space and Time.