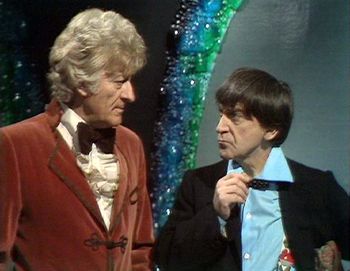 Two Doctors are better than one. (When they aren't bickering, that is. Then you need a third one on a fuzzy monitor to break them up.)
"Oh, so you're my replacements — a dandy and a clown!"
— The First Doctor, being incredibly unimpressed by his future.
Advertisement:

The one where self-loathing takes on a whole new meaning.

The tenth anniversary of Doctor Who was marked with the first "Multi-Doctor" story, a concept which would be used several more times over the coming years.

The Doctor is investigating the appearance of a mysterious blob-like creature which, it transpires, is hunting him down. Reluctantly, he calls on the Time Lords for help. Unfortunately, they're a bit preoccupied with a black hole draining all their energy, so they send his past selves over to help. The Second Doctor appears in the Third Doctor's TARDIS, and the two of them immediately proceed to bicker Like an Old Married Couple before grudgingly opening up a psychic link ("Contact!") between them. The First Doctor is caught in a time eddy and can only advise via the TARDIS viewscreen, but he deduces that the blob creature is a "time bridge". The Third Doctor and Jo, being a good companion and despite the Doctor's protests, allow it to capture them and they are transported to a world of antimatter beyond the troublesome black hole.

Meanwhile, back on Earth, the Second Doctor, the Brigadier and Sergeant Benton take refuge in the TARDIS. The Brigadier flat-out refuses to believe anything that's going on, and the Second Doctor trolls him mercilessly. The First Doctor tells the group to switch off the forcefield, and the TARDIS (and with it the UNIT HQ) are all transported to the antimatter world.

It turns out that the problem is Omega, a renegade Time Lord. Omega was a stellar engineer, and his experiments enabled the Time Lords to develop time travel. But one of his experiments went wrong and trapped him in the antimatter universe. Now he wants to return, but he needs a matter counterpart to take his place, and he wants the Doctor.

Driven mad by his isolation and physically corroded to the point where only his will survives inside his armour, he threatens to destroy the universe, but he is tricked into picking up the Second Doctor's recorder — the only thing not converted to antimatter when they travelled through the black hole — by the Second Doctor, using his outward appearance to appear harmless and waffling to annoy Omega like he always does, and is destroyed.

As a reward for saving the universe, The Doctor's exile is lifted and he's able to use his TARDIS normally once more.

Jo quotes "I Am the Walrus"

After the Second Doctor is brought in to help the Third, the pair attempt to explain to Jo that they're different incarnations of the same Time Lord. Jo, still confused, riffs on Three's explanation by quoting the Beatles song "I Am the Walrus".

Jo quotes "I Am the Walrus"

After the Second Doctor is brought in to help the Third, the pair attempt to explain to Jo that they're different incarnations of the same Time Lord. Jo, still confused, riffs on Three's explanation by quoting the Beatles song "I Am the Walrus".