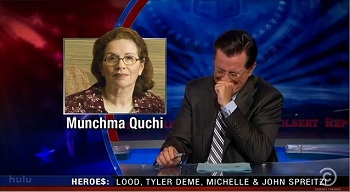 Stephen Colbert valiantly tries to keep a straight face.note Her son's name, "Suq Madiq," as well as her husband, "Liqa Madiq", didn't help him keep his composure.
"Christmas means many things to many people. To some, Christmas means glittering lights, gaily wrapped gifts. That's right, sounds of laughter and good cheer. To the folks at Preparation H– hahahahaha– it means a time to pause for a few– hahaha- a few moments to– HAHAHA- to give thanks to their friends, who've been so... [collapses into helpless laughter] …kind and generous!"
— Gary Owens, caught off guard at realizing the sponsor of the ad he was reading

was a hemorrhoid cream
Advertisement:

"Corpsing" (also called "breaking") is actor-speak for having an unscripted fit of laughter onstage, so-called because the worst time to have the giggles is when one is playing a corpse. Corpsing doesn't necessarily mean that the material is especially funny (though, of course, it can be), or that the actors aren't taking it seriously; it just happens, and even excellent actors can corpse. Many actors try to cover this by covering their mouth and muffling the sounds they make. When this is done, a fit of laughter can rather haphazardly be turned into violent sobbing, with varying levels of success. Of course, that only helps if violent crying is appropriate for the scene (again, playing a corpse leaves you in trouble, as corpses don't cry either — usually).

Some actors, of course, will try their level best to make other actors corpse. It seems to be a feather in one's cap of some sort, to either be the guy who never corpses, or the guy who can make even the guy who never corpses corpse. Bonus points if you're working in a scene with a very seasoned and well-respected actor. Even if they have a great sense of humor in real life, getting someone the caliber of Robert De Niro or Meryl Streep to get the giggles is a big achievement.

At other times, it is just mean to tell an actor to keep a straight face on camera while watching a character bounce off the walls. And if somebody happens to have Contagious Laughter, you're in real trouble.

It's rare to see extras corpsing in the background. The main cast can get away with corpsing without being fired, but if they do manage to get through a take without laughing, and then an extra ruins the scene by laughing in the background, that extra will probably be let go on the spot and probably blacklisted from future projects.

A common type of Hilarious Outtakes. On the other hand, can be subject to Throw It In — if the work is a comedy and the actors are able to recover in time for their next line, it can make for a natural aversion of Tough Room. Opposite of The Stoic; see also Not So Stoic. When this happens In-Universe, it's a subtrope of The Show Must Go Wrong. Compare Angrish, when it's anger that prevents someone from speaking coherently.

When the hapless individual actually is trying to play a corpse, this can overlap with The Living Dead.

Has nothing to do with Joker's laughing gas that makes people laugh to death (although some overlap is surely imaginable).

George Dawes struggles to keep a straight face whilst performing the Peanuts song.

George Dawes struggles to keep a straight face whilst performing the Peanuts song.